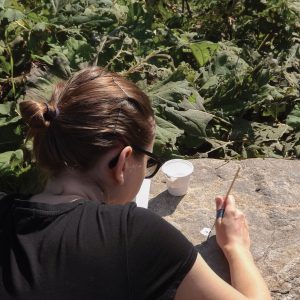 Giulia Zappa is graduated in 2012 in Painting and in 2014 she specialized in Visual Contemporary Arts at the Accademia di Belle Arti SantaGiulia in Brescia. In 2012-2013 she participated in an Erasmus project at the Ecole Supérieure d’Art de Clermont Métropole in France. In 2010-2012 she was a member of a gallery run by a group of artists, Spazio Qasba, in Brescia. She won the special Circolo degli Artisti of Albissola prize, during the Arteam Cup 2017 award. In 2015 she won the special mention of the curators during the San Fedele Award, at the Galleria San Fedele in Milan.